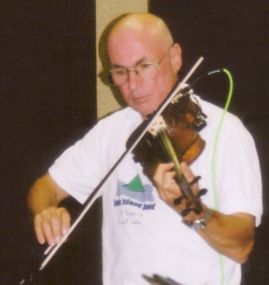 Laurie in full flow, September '02.
Clearly enjoying himself, the concentration is intense!

Laurie Griffiths, founder member and lead player in Spike Island Band for over twenty years, was tragically killed by a car whilst walking near his home on Saturday 23rd November 2002.

How was he killed? Here are two articles from the Southampton Daily Echo

A DRIVER has been quizzed by police after his high-performance sports car was involved in a crash which killed a pedestrian on a busy Southampton road.

Freelance computer programmer Laurence Griffiths was knocked down by a blue Maserati Coupe which mounted the pavement in Bassett Avenue on Saturday afternoon.

Today police confirmed both the driver of the Maserati and his passenger had been arrested and questioned in connection with the fatal crash.

The pair, both in their 50s and from Southampton, had been detained at the scene of the collision, which happened just north of the junction with Ridgemount Avenue.

Police said both had now been released after questioning, pending further inquiries into the crash.

Meanwhile traffic officers today formally named the victim as Laurence Kelvin Griffiths, who lived in nearby Bassett Row. The 55-year-old was believed to have been married but estranged from his wife.

Police said the Maserati had been travelling north along Bassett Avenue when the crash happened between the Winchester Road and Chilworth roundabouts. The collision, which happened at 4.50pm, caused the road to be closed for several hours - just as thousands of Saints fans were battling to get out of town after Saturday's victorious clash with Arsenal.

Today police issued an urgent appeal for witnesses to the incident. In particular, traffic officers want to trace the occupants of a green people carrier-type vehicle which was travelling south and the occupants of a Smart car heading north around the time of the crash.

Both sets of people are believed to have vital information to help the police inquiry. 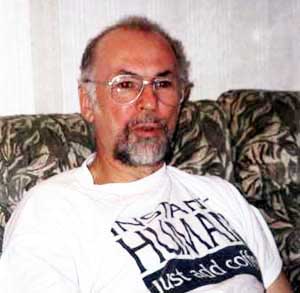 A Southampton grandfather who had gone out for a walk for a computer screen break died after being struck by a Maserati sports car which mounted the pavement, it was revealed today.

Laurie Griffiths had gone out for a walk to clear his head after working hard at his computer at his home.

But the 55-year-old freelance computer programmer was knocked down by the blue Maserati Coupé which mounted the pavement in Bassett Avenue, Southampton.

Today tributes were paid to father-of-four Mr Griffiths, who lived in nearby Bassett Row and was described as having a brilliant mind.

His widow, Alison, said: "He was a good man and very bright."

Describing the tragedy as a freak accident, Mrs Griffiths said: "He had been working in front of his computer during the day. He must have gone out for a walk to get some fresh air and clear his head."

Although Mr Griffiths, who came from the Bristol area, spent a lot of time at his computer he was aware of the importance of keeping fit. He enjoyed walking and cycling and was a keen sailor.

He graduated from Cambridge University with a first-class honours degree in theoretical physics. Before becoming a freelance computer programmer he worked for IBM, Sony and Microsoft.

Two years ago Mr Griffiths fulfilled his ambition by being one of a crew who sailed across the Atlantic.

He was a keen musician and played a leading role in the Spike Island Band - a Southampton- based barn dance group.

Mr Griffiths' death has stunned the closely- knit Bassett Row community. Summing up their feelings, next-door neighbour Philip Butcher said: "He was such a popular person in this little community. He was an outgoing and kind person and so full of humour and always so interesting."

Eastleigh traffic police are renewing their appeal for information about the accident, which happened in Bassett Avenue just north of the junction with Ridgemount Avenue at about 4.50pm on Saturday.

Mr Griffiths was knocked down by a blue Maserati which was travelling north between Winchester Road and the Chilworth roundabout.

The driver of the Maserati, a man in his 50s, and his woman passenger, also in her 50s, were detained at the scene but have now been released pending further inquiries. Both are from Southampton.